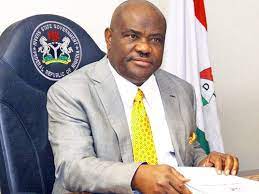 One of the most controversial personalities and politicians in Nigeria currently is Ezenwo Nyesom Wike, CON. In this article, we will look at who Wike is, his lifestyle, family, net worth, and presidential ambitions.

Who is Ezenwo Nyesom Wike?

The sixth and current governor of Rivers State is a Nigerian politician and attorney named Ezenwo Nyesom Wike CON was born on the 13th of December 1967. He is an Ikwerre from Rumuepirikom in Rivers State’s Obio-Akpor. He received his education at the Rivers State University of Science and Technology and is a member of the People’s Democratic Party.

From 1999 until 2007, Wike served as the Obio Akpor Local Government Area’s Executive Chairman for two terms. On July 14, 2011, he was named Minister of State for Education. After Mrs. Ruqqayatu was fired, Wike was named the acting minister of education. However, he resigned before the end of his term to run for governor of Rivers State. He selected Ipalibo Banigo, a former secretary to the state government, as his running mate for deputy governor after winning the Rivers State People’s Democratic Party primary in 2014.

In the 11 April gubernatorial elections, Wike prevailed over Tonye Princewill of the Labour Party and Dakuku Peterside of the All Progressives Congress (APC) to win the position. Atiku Abubakar defeated Wike in the People’s Democratic Party presidential election primary held at the MKO ABIOLA National Stadium in Abuja on May 28 and 29, 2022, with 371 votes, while Wike received 237 votes, placing him in second place. In March 2022, Wike announced his intention to run for president of Nigeria under the People’s Democratic Party platform ahead of the 2023 general election.

Nyesom Ezenwo Wike was born into the family of Reverend and Mrs. Nlemanya Wike. He is a native of Rumuepirikom in Obio-Akpor, Rivers State, Nigeria. His father, Nlemanya Wike is a reverend and worships at Azikiwe road, Port Harcourt. His father is still alive, and much is not known about his mother. However, there’s no detailed information about Wike’s siblings.

Three children were born into their union, and Governor Wike and Eberechi Suzzette Wike are happily married. The couple wed in 1999 and have remained together ever since without causing a significant scandal or incident. Some sources have referred to the couple as “Nigeria’s most amorous political couple.” They frequently appear in public, displaying their own love and affection. Wike has frequently been observed kissing his wife in secret while doing so.

Wike and his wife, Eberechi, are frequently spotted together at social gatherings and events that are open to the public, and they are well known for their flattering remarks about one another. Eberechi Suzzette has characterized her spouse as diligent, focused, serious-minded, and hardworking. In 2016, she sent a touching post on her Facebook page to commemorate their 17th wedding anniversary.

According to information acquired by DNB Stories Africa, Wike first met his wife while they were both students at the same university. Eberechi claims that she and her husband sat in the same lecture hall for three years without even saying hello to one another. However, once she needed to borrow a notepad from him, they eventually became friends.

Three kids—two boys and a girl—belong to Governor Wike. Jordan Wike, Joaquin Wike, and Jazmyne Wike are the names of the kids, respectively. Wike’s children are currently the subject of relatively little information because their parents have chosen to withhold specifics about them from the media. However, one of Wike’s sons recently graduated from one of the universities in the UK. Jordan Nyesom-Wike, the governor of Rivers State’s son, received his tertiary education in the UK. At the University of Exeter, he received a Second Class Honours (Upper Division) in Law. The graduation was attended by some PDP governors and members of Governor Wike’s family. Seyi Makinde, the governor of Oyo State, Okezie Ikpeazu, Wike’s wife Justice Eberechi Nyesom-Wike, and his daughter Jasmine Nyesom-Wike attended Jordan’s graduation. 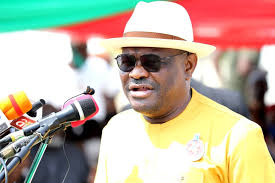 Recently, Nyesom Wike (the volcano – as I would love to call him) in coastal Port Harcourt has started rumbling noisily – not that he has ever been dormant, really! You must give it to Wike because he is constantly ready to be sparked and is blessed with plenty of energy to talk and act in equal measure. He has a remarkable ability to frequently enter the fray. Wike seems to be the kind of person for whom enemies are never in short supply or, in fact, far distant. He makes a big effort to woo them if they cannot find him. It seems that conflicts are his way of life.

Without a doubt, Wike’s time as governor of Rivers State has been eventful. Nobody, not even his sharpest adversaries, can credibly refute the governor’s hard work and significant contributions to the state, particularly in the area of infrastructure development. The numerous roads and bridges he built throughout Rivers State speak much about him. Wike’s concrete works in Rivers provide him with a substantial platform on which to put his boasting for a man who never misses and cannot let a bragging opportunity pass. Recognize that he has put a lot of effort into earning his bragging rights.

Although his supporters occasionally get sick of him, they also acknowledge that Wike’s leadership has had a positive impact on Port Harcourt and other areas of the frequently unresting state. When Governor Nyesom Wike leaves office, Rivers State will undoubtedly remember him for his work on roads and bridges as well as for his frequent tirades, which were properly broadcast on television channels for effect.

Based on his accumulated earnings as a Nigerian politician and lawyer, Nyesom Wike is currently valued at approximately N275 billion. Wike now ranks among Nigeria’s wealthiest men as a result of this. Wike is not a businessman, yet he has significant investments across Nigeria in real estate and oil and gas companies. Governor Nyesom Wike is undoubtedly a man of impeccable taste, as seen by his brand-new home on Port Harcourt’s Ada George Road. A mansion worth several million naira that exudes riches.

Read Also: Shocking revelation: How Tinubu got the name “Jagaban”

A peep into Wike’s presidential ambition.

Nyesom Wike recently announced that he would run for president of Nigeria in the 2023 election. When Wike visited Samuel Ortom, the governor of Benue State, at Government House in Makurdi, he reportedly revealed this. “I shall be standing for the office of the president of the Federal Republic of Nigeria,” the governor announced on his Facebook page.

According to Wike, who was quoted by Channels Television, only he has the ability to depose the All Progressives Congress (APC) from its position of federal dominance.

After months of speculation over his presidential aspirations, Mr. Wike finally made his announcement. Wike said during his visit to Benue State, “I’m making the announcement for the first time in Benue State that I’m going to run for the office of the President. I am the one who can tell APC that enough is enough in order to remove them from power. I’m willing to take this power for the PDP because we have to take it. Because God is with us, APC keeps failing every day”.